I’ve been reading a bit of metaphysical detective type fiction lately, and enjoying it immensely. Not just because it’s well-written with good characters (especially if you like a good mystery!), but because the essence of the magic in it just feels right. It does play with a lot of magical archtypes and myths, but the way the magic itself WORKS, the base of it all, just seems spot on to me, (and I tend to be much more based ‘reality creation’ or metaphysical type approaches (Seth, Abraham, etc) and not as much versed on the pagan end of things.) 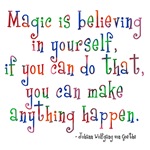 The more ‘systems’ of thought I learn in terms of metaphysics, in terms of how the different teachers approach the subject, the more satisfying it is to find the essence of each and how they are basically the same, if done well.  For instance, in the Conscious Creation avenue, there’s the idea that you have to focus on what you want, and then let it go, go do something else, and let the universe bring together the pieces and manifest the end result. In many pagan approaches, there is the spell-casting, and often the burning of a paper on which the spell or intent was written, thus sending it to the higher beings to make ‘real’.

The ritualistic aspects of the pagan approach have history and practicality on their side – the steps you take are very specific and offer a repeated neural pathway in which to train the self. It also mirrors the steps that consciousness has to take Although sometimes the ritual is remembered more than the reasons behind it, in which case the spell casting is not as effective. The Conscious Creation approach has the concepts of modern psychology and philosophy going for it, which certainly appeals to the left brain, and explains WHY it all supposedly works, but the lesser grounding in physicality can sometimes leave open a door for endless mental entanglement, self-doubt, and thought spinning, getting nothing accomplished, physically speaking.

I have the urge to create a system of rituals for Conscious Creation, to blend the metaphysical and pagan ideas to see what I can come up with. I’m sure many people are already doing this, have done this. Of course, there’s always room for a new system. They are like facets of a crystal – you can understand the facets, and begin to get the feel or knowing of the larger crystal, but from a standpoint in physical reality, you’ll never be able to see the entirely of the crystal all at once with our eyes (or left brain). What a tease!